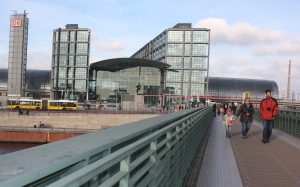 My first impression of Berlin was boxy, geometric and structured. This, however, deserves some context. I stayed next to its central train station (Hauptbahnhof) which opened in 2006 on the border of what used to be East and West during the Berlin Wall (1961- 1989). Today in and around this area stand 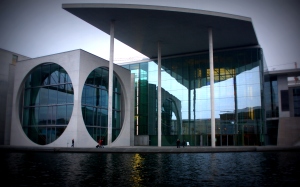 many of Berlin’s most impressive modern (or renovated) buildings: the German Parliament, the German Chancellery, Marie-Elisabeth-Lüders-Haus (legislation building), the historic Brandenburger Tor, numerous private-sector enterprises and the Memorial to the Murdered Jews of Europe (which by design consists of 2711 concrete blocks).  The (recent) history of Berlin is hard to comprehend in a single visit, and especially these days when the former border zone is teeming with life and interaction. “A unique landscape with huge potential“ as stated by the German Center for Architecture. Parts of the wall remain for symbolic reasons, but Berlin is a united city. For a first-timer it is difficult to know which side of the city you are on, without a local referring to it as the (former) East or West.

This post, however, is not so much to look at the history of Berlin; but to acknowledge where it has come. In the 20 years since, Berlin has transformed. And with this, a new form of architecture boldly makes its claim. The parliament, museums, government offices and bridges connecting them, are gigantic, impressive structures. They sit on the rivers that wrap around the central city, or are surrounded by long lawns; granting the centre a formal and official feel. From an architectural point of view, they are skillfully designed, with attention to detail, angles and perception. Still, one feels minuscule walking next to these towering structures. 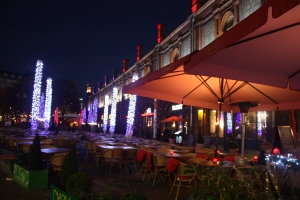 But Berlin has a softer side. The city hosts beautiful parks, such as Tier Garden (5.17 km2) in the centre or Tempelhofer Park (former airport) in the South. Its cozy neighborhoods encompass small cafes, book stores, second-hand shops and market squares. The rivers feature

cycling and walking paths. And, while much of its historic architecture was destroyed in WWII or suffered neglect during the Cold War, many of its most beautiful buildings survived. Others are in the process of renewal: older facades incorporated in new designs, preserving the city’s history. Berlin’s architecture mixes old & new, East & West, boxy structures with attention to detail & green spaces. It is carefully sensitive to the city’s past, whilst acknowledging its present, and looking to its future.  As someone fascinated by city planning strategies, I was told for years, “You have to visit Berlin.”  As anticipated, I was impressed.

But while its size and architecture scream massive; it is also one of Europe’s most cycle-friendly cities. Bicyclists, cycle paths, signage and bike parking are everywhere; softening the landscape and hinting to a friendly atmosphere. Berlin is a large city (891.85 km2/

population over 3,500,000). And yet, cyclists are in abundance. Berlin demonstrates that despite the size of a city, people will cycle; if provided the right infrastructure or the ability to take the bike on public transport. This time I opted to explore by foot (something I rarely do in Amsterdam and always enjoy), hopping between districts with the local train services.  Through this wandering, I arrived at a few observations:

3 thoughts on “Berlin: a big city with history (and bicycles)”

A meditative weekend with @vergarapetrescu in the #Andes. Thinking about the year & years ahead: what do we want as individuals & together? And oh what a spot for a little bit of silent reflection. ⛰🙏 #mountainlover #CajundelMaipo #reflection
Family weekend on a lonely beach cove. Lovely! Until the migraine & stomach flu hit. Finally feeling better, 5 days later. #playa #Chile
#sunsetinaglass #vino #wine #playa #megusta #oceanopacifico
❤️🐕
#beachwedding 💛☀️
What could possibly go wrong with a small, leaking fishing boat on the Pacific Ocean headed to a wedding? Thankfully nothing! #boda #bröllop #wedding #Chile @vergarapetrescu
💛☀️ #beachwedding @vergarapetrescu
#2019 ended like... 💛🎉 A few photos from our #wedding #boda #bröllop #Chile #amor #forever @vergarapetrescu
%d bloggers like this: