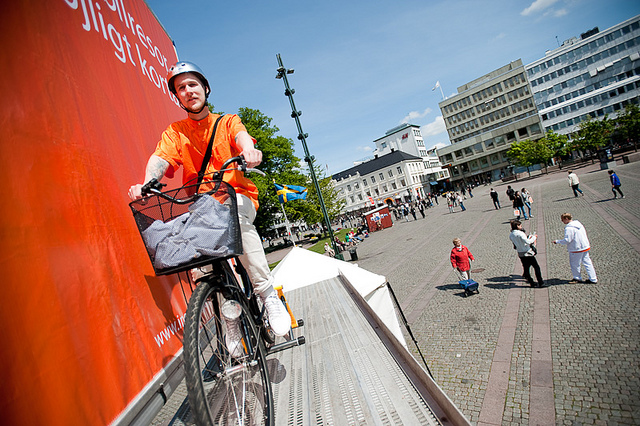 For several years in Malmö (Sweden) May was “No Ridiculous Car Journeys” campaign month, or in Swedish Inga löjliga bilresor. This campaign, launched in 2006 and repeated for several springs, includes animated displays, a dose of humour and a competition for the “most ridiculous car driver.”  In one of Malmö’s central squares (Gustav Adolfs Torg) a bright orange billboard (and signs across the city) emphasised that “More than half of car trips in Malmö are ridiculously short.”  (Each year the statement was revised as driving dropped.)  More than a billboard: on the platform, stood a bicycle – and a cyclist. This, combined with concerts at the foot of the billboard, drew attention of families, employees on their lunch break and passersby. Complete with free giveaways (e.g. bicycle seat covers, drying clothes and water bottles) citizens could enter themselves or a friend to win “the most ridiculous car journey” contest.  Ridiculous car journeys were defined as less than 5 kilometres– easily done by bike in about the same time. The winner received a bicycle or (if they had a bicycle) a bus pass.

The campaign was not limited to city squares.  Civil servants and volunteers rode through Malmö in bright orange jumpsuits (the campaign colour) with shiny silver helmets on baby blue bikes. The blue symbolizing how clean Malmö’s skies will be with more bikes.  These cyclists showed off bike bags that stated, “I used to be a car driver” as they weaved past cars stuck in traffic. This campaign was highly visible in Malmö (even spreading to other cities and receiving international attention). When polled, half of residents confirmed they were familiar with it; 15% stating it reduced their car travel – over 20,000 inhabitants. With colour, music and cheeky messaging how could it not?

No Ridiculous Car Journeys was a part of a larger EU project, coordinated by Malmö, with European partner cities called Cleaner and Better Transport in Cities (CIVITAS SMILE). Malmö also received national funding for its transportation efforts from the Swedish Climate Investment Programme (KLIMP).  Together these funding streams provided resources to invest in a wide range of activities: from cycling/ walking ‘carpools’ to drop-off or pick-up children (coined the Friendly-Way-to School), to promotion of companies that cycle the most to work, as well as improved infrastructure to make cycling more convenient (e.g. bicycle counters in different parts of the city, lean-to bars for cyclists waiting for a light or 24-hour free electric tire pumps). Even environmental choirs were used: boarding city buses or cycle-singing.  Their songs followed familiar melodies of traditional folk songs; but with new lyrics about climate change, public transport, bicycling and staying fit.

Malmö’s sustainable mobility efforts are about more than cycling; they include: biogas from food waste used in city buses, prioritizing public transport and bicycles at stop lights, eco-driving courses, smart route planning and investments in green fleets – thinking holistically about sustainable urban transport.  (There is a great PDF about Malmö’s transportation strategies).  The final results speak for themselves: the total share of car journeys in Malmö fell from 52% in 2003 to 41% in 2008. Simultaneously cycling, walking and public transport increased. Today every fourth Malmö journey is done on the bicycle.  The next challenge remains: concentrating on regional commuters to/ from Malmö, where car-driving has remained more constant.  I’m looking forward to Malmö’s creative approaches to tackle this challenge – a common one for many cities!  Want to know more about No Ridiculous Car Journeys? Check out the video & additional photos below: