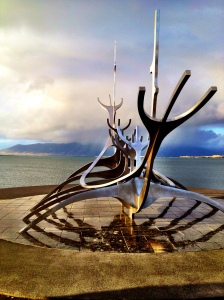 In May 2013, I was in Reykjavik for a PhD course on Climate Adaptation Strategy and Economics at the University of Iceland. It was coordinated by the Nordstar Research Programme (my second time to the Icelandic capital with Nordstar). Reykjavik has a great small-city meets big-city feel, with many fun surprises worth blogging about. This is the second time I visited this magic city, and it continues to charm me.

Last time, I wrote about a creative approach to curb inner-city driving – turning car parks and downtown streets into walking spaces and public squares over the summer. While the car-free campaign isn’t all that popular with Icelanders (who love their cars) it offers a different feeling in the central city – where pedestrians and outdoor cafes dominated on my last visit, cars held the reign in May. As a fan of the bicycle and walking spaces, it was interesting to observer Reykjavik in these two contrasts.

Still, with Reykjavik’s quirky charm, Viking roots and stark contrasts between concrete grey and bright colors, as well as between its dark rain clouds and sunshine, I was eager to explore the city again. The central city district is easily walkable and quickly offers a sense of familiarity. Aside from the car versus bicycle debate, another thing that becomes apparent when wandering the streets of Reykjavik is the city’s love of public art.  A variety of sculptures can be found in its public squares and parks, and many buildings are painted in contrasting hues.  Visiting the Northernmost capital city near the summer solstice has its advantages: long hours of daylight for exploration.

Reykjavik is also home to beautiful and skillfully-crafted street art. Walking around the city centre, it is easy to find bold masterpieces dominating several of its downtown buildings.  One of most famous areas for graffiti art is the city’s skatepark, blocks from the harbour and just off the main drag.  Rumors have it that this area may be sold to build a(nother) hotel, but so far the skatepark stands its grounds.

The skatepark isn’t the only place where oversized murals are found.  Many bars, cafes and even homes have beautifully designed art spaces and some of its older buildings (residential or otherwise) are painted in bold colours – perhaps to help relieve some of the darkness that dominates in the winter. Either way, Reykjavik’s artistic expression pulls a
curious explorer through its city streets and hidden alleyways, eager to find more. 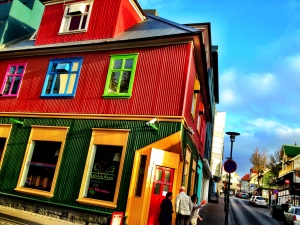 It’s not only on the city walls that Icelanders display their art.  Iceland is known for its pottery, knitwear, craftsmanship and folklore, inside the city and its countryside. In Iceland, the power and dominance of the natural world is constant, and this most certainly influences its people and its artistic expression.

One thought on “Reykjavik: the city as a canvas”

I always love my walks with this guy. But now I cherish those 30 minutes of police-approved outdoor time for dog walks. Gracias Choco! 🐕❤️ Although truthfully, this is a dog’s paradise. Constant love & attention. So so much ❤️ until it’s too much. I’m not sure which stage we are in. 😂 @vergarapetrescu #adoptdontshop
Yesterday we celebrated 3 months of #marriage! A bit different than planned, inside in #lockdown, but still lovely. Thinking of our special day & all the great folks that joined us from across the globe. 🌎❤️ This charming photo followed (less than 5 minutes later) by a shattered wine glass & a red-stained wall & floor. 🤦‍♀️🍷 I guess that’s better than the broken car door window the day after our wedding by an attempted break-in & the cancelled New Years reservation for 10 friends, day of. 😬😅 In any case, we are keeping our tradition of celebrating with a “bang” alive! Thanks @heleenmariken for reminding us of this special day (haha 😂) and for your gorgeous card! Can’t wait to connect with you in person, not just virtually 😘
#HappyBirthday to the kind of sister that will agree to jump into a sinking fishing boat on the Pacific Ocean with you, break her hand at your wedding, but not complain because it’s your “big day”, deliver a tearjerking speech, rock a homemade cast for the rest of her Chilean adventure... and treat us like the best of guests when back home. We love you & hope for a relaxing #COVID-19 kind of birthday!
The many faces of #Choco. Our loyal friend in these uncertain moments. Although. Truthfully he’s quite enjoying the #lockdown with so much quality time (and a few kitchen scraps... look at those 👀!!!). And we are thankful to him. For the cuddles. The calm. And the excuse (with permission from the police even) to go outside for 30-minutes allocated dog walks! 🐕❤️
#Grateful. In the face of everything, this feeling overwhelmed me yesterday, with a #covid_19 lockdown hours away. Choco 🐕 & I took a little longer morning walk while we could. Completely respectful of #socialdistancing, we walked to the edge of our park to watch the sunrise warm the city. Golden rays danced magically across the Andes & into the now quieted #Santiago streets. The Andes which have been so clear this last week, due to lower air pollution levels from fewer vehicles & activity. A rebirth of their silent, watchful eyes over the city. There we were. Reflecting upon all that makes us great as a species & the consequences of our greatness. Feeling connected in isolation as we collectively endure this crisis in a uniquely urban era & thankful for ICT to stay informed. I am also fearful. Away from my family, while making a new one here in #Chile. Worried of what this means for our economy and especially the most vulnerable. But more, I am hopeful. A moment of pause. A moment of reflection. A moment of collective vulnerability & awakening. Weakness is strength. A realization that the earth & her resources are not just for taking & exploitation, but require respect. Can we learn this same lesson of respect & connection to each other? But aside from big-picture changes that we will undoubtedly confront & eventually embrace, I am grateful for the little things. My health. My kind & patient husband & lazy dog. Slow meals in isolation & reading dusty books on shelves that have waited for me. A job that is supportive & conducive of #workfromhome. My family & friends near & far. May they stay smart, may they stay safe, may they #stayhome. I am also grateful that humanity begins to realize that real #superheroes are found in nurses, doctors & public school teachers. A superhero status I have long known, proud to come from a family of health professionals & public school educators. Does my gratefulness make me less aware of the ongoing suffering of many... from a lost paycheck to a lost loved one? Or the contrary. I will use my awakening, my gratefulness, to build my empathy. To support. To connect. To endure. We will get thru this. But only #together ❤️🌎
As #Chile goes a little crazy in light of #covid_19, like the rest of the world... it’s easy to mix logic, fear, uncertainty, question. I’m not the expert to decide if closed borders & social distancing or lockdown is the right approach. But I trust the experts here and follow the guidelines. And well, it’s easy enough (for me) to work from home. So I do. Lighten the load in public spaces for those who can’t. #flattenthecurve. Meanwhile. For those moments & appointments that require you to leave, nothing beats the bike. Not only for #socialdistancing measures, but also for the great things you see along the way. I needed this little dog in his own set of ski googles a few days back. Gracias #Santiago cyclist. #betterbybike with @vergarapetrescu
Perspective #covid_19
#8M 💚💜👊
%d bloggers like this: