One of my favorite things about city cycling is the opportunity to witness the random, often obscure things that people take on their bicycle. After five years in Amsterdam, I can attest that the Dutch are the masters of this. I’ve nearly seen it all: Christmas trees carted on two wheels; luggage rolled next to a bike; or electronics carefully balanced across the handlebars.

Some of my favorite encounters include witnessing dogs on bikes, or entire families somehow balanced neatly on a single cycle. The relationship between the Dutch and the bicycle is something that continues to fascinate me, while simultaneously something that I’m eager to be a part of. Hey, I’ve even moved by bike in Amsterdam – twice! Thank goodness the city is flat!

Still, while cycling dogs are somewhat common in Amsterdam – so much so that they even sell dog carriers for your bike – cycling cats are a rarity. No wonder Philadelphia-based bicycle courier Rudi Saldia, and his feline sidekick Mary Jane, have become an internet sensation after  he first posted a video, named “My Cat Can Ride A Bike Better Than You.” 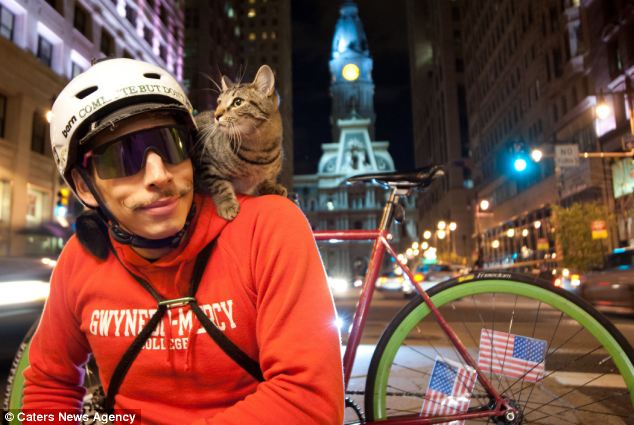 With the help of a GoPro, and certainly his trusty sidekick, Saldia has since followed this up with several other cat-bike-combo videos (see below). The cycling duo has also been featured in several news articles  and become a Youtube and social media sensation. As one source put it: bike-themed videos are popular; cat-themed videos are popular… put them together and the internet is in love.

Internet sensation aside, as a lover of city cycling (and the fun quirky surprises one can encounter while exploring a city on two wheels) I think this pair deserves credit for demonstrating their love of the bicycle lifestyle, while gaining many fans in the process and offering a good glimpse of Philadelphia’s improving bike infrastructure. Ride on!